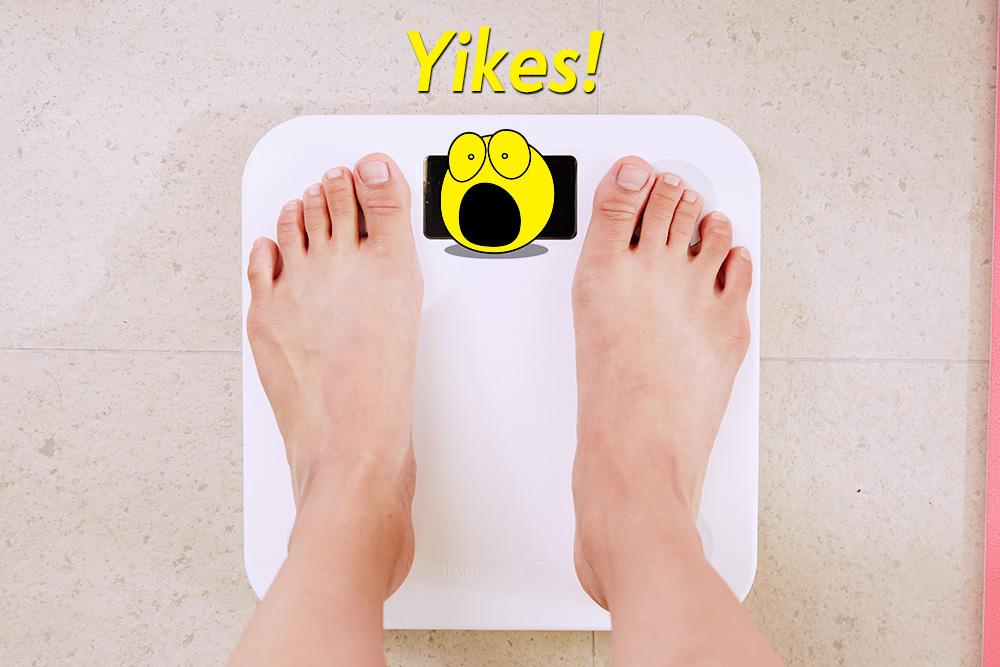 It goes without saying that humans are designed to be energy efficient and to store anything extra in case we need it later. And that could be the entirety of this article. But there are some underlying mechanisms to weight, what is fat and what is water, and how they interact that you might find interesting and psychologically helpful during your health journey.

As you read this please keep in mind that weight isn’t a static number. The numbers I’m sharing are based on my weighing myself twice a day and tracking my weight VERY closely simply for the sake of being able to share real data with you. Please DO NOT obsess about the number on the scale. The information I am sharing is to give you a better understanding of what is going on in your body and help you get through the holiday season without making yourself nuts or throwing your hands up in frustration. No one benefits from giving up on their health for the six weeks that is “the holidays.”

If you watch our daily Facebook lives you know that in the middle of November we attended two vegan potlucks in a row. Between that Friday morning and that Saturday night I (Dr Robyn) gained five pounds (!). A week later one of them was still around. Then Thanksgiving and all its yummy leftovers arrived. As of this writing I am up 2ish pounds from where I was in early November.

I am not concerned about it. Two pounds is nothing and I know that the number will drop back to normal easily enough when the extra yummies (mostly desserts for me) of the holidays are behind us.

But, how does weight pop on so quickly, in less than 48 hours in my case, and then take a week or more of consistent healthy eating to go away?

Bulk – The first thing that shows up on the scale is food weight. The average person eats about two pounds of food and water a day. If you weigh yourself when you first get up in the morning and then again right before you go to bed, you will see that.

I typically weigh two and half to three pounds more at night than I do in the morning (Russ varies as much as five pounds). But the next morning, I’m back where I started.

If you eat more volume, like I did when trying all the things at the potluck, you are going to eat more weight. So, a higher number on the scale should be expected. But then it doesn’t go away overnight like it usually does.

Extra energy – More food means more energy (I’m not a huge fan of the word calories because they aren’t really a thing. But for the sake of ease of understanding, energy = calories). Your body gets SUPER excited that there is an excess and hoards it away to make sure you survive the next famine (which isn’t coming but it doesn’t know that).

Conveniently your body has empty fat cells just waiting to be used for storage. It takes a lot of energy to turn carbohydrates into fat. Your body would rather use them for energy. But any fat you ate is easy to tuck into those empty fat cells.

Water as a place holder – Now you have the extra energy you ate stored on your hips. But you go back to your regular Whole Food Muscle way of eating and your body starts using that fat as energy to get you back to your ideal weight.

Unfortunately, you don’t see this fat burning show up on the scale right away. Your body thinks, “Well, there was some extra energy. Let me just hold this fat cell open so I can refill it double-quick if we have another windfall come along.” As it burns the fat out of a cell, it replaces it with water – keeping your weight stable at the higher number.

Now, if you continue to not take in extra energy you body will eventually give up on holding the space and, whoosh! you’ll suddenly lose several pounds at once (often three or four). The Whoosh Effect is a medically recognized weight loss thing. It is explained in some detail in our book, How to Feed a Human.

But, it’s the holidays so maybe you eat the Whole Food Muscle way for five or six days and then you have an event to attend. Some yummy vegan junk food or maybe an extra glass of wine and your body says, “Ooo, good thing I held those fat cells open!” The water in the fat cell is once again replaced with fat and you continue to be stable at that higher number on the scale.

As annoying as that is, and trust me I know it’s annoying, it’s really not a big deal. If your weight is stable at two or three pounds above your ideal just for the holiday season, don’t stress about it. You are filling and burning the same bunch of fat cells and when the holiday parties are over, you’ll go back to your ideal weight easily enough.

However – and this is important – if your weight is creeping upwards each week, you know you are attending too many parties, drinking too much wine or bringing home too many leftovers. Your body can deal with a spurt of extra energy once a week or so. Anymore than that and you’re going to be opening extra fat cells on a regular basis and not burning the fat in them in between the parties.

In short, don’t deny yourself a goodie here and there throughout the holidays. Just make sure you’re eating the Whole Food Muscle way most of the time and continuing to do your exercise. Don’t let the holidays turn into an excuse to sit on the coach watching Christmas movies and eating Bon Bons (are those still a thing) for days at a time. As Dr T. Colin Campbell says, “It’s not the now and then that kills you, it’s the every day.”

Get a jump on the learning curve for your New Year’s health plans! Join the Whole Food Muscle Club today so you can hit the ground running as soon as the calendar rolls into 2020.