Pros and Cons of Microwaves – is using a microwave safe? 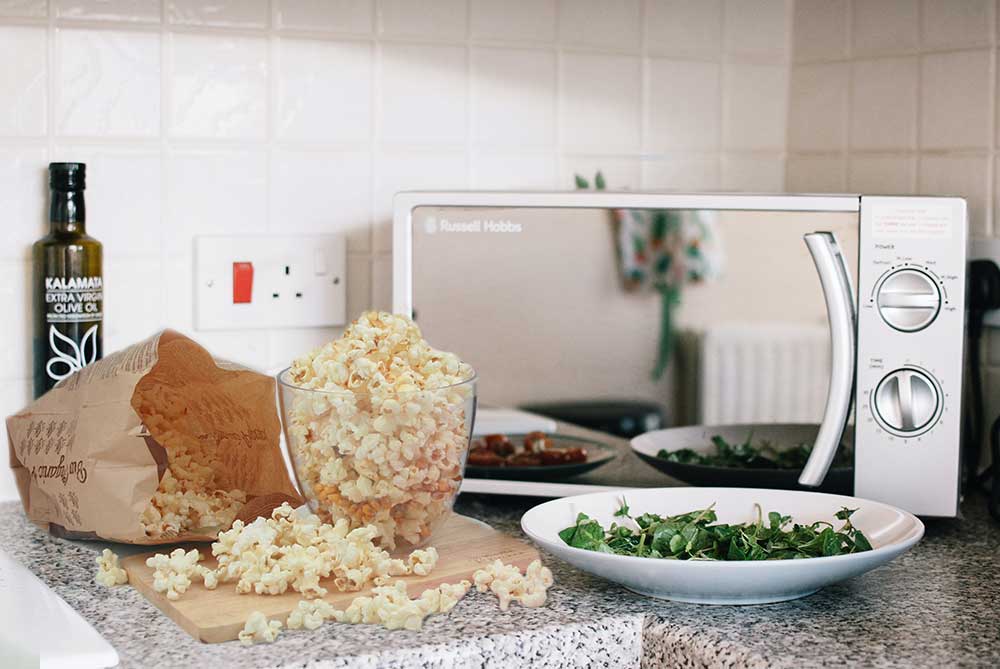 There are often heated (pun intended) conversations online about microwave use. One camp believes microwaving food sucks all the nutrients out of it. Another claims that microwave radiation causes brain cancer. And then there is the crowd saying microwaves are fine and everyone needs to get a grip.

Let’s look at the facts and you can decide for yourself if the ease and convenience of heating food in a microwave is right for you.

The electromagnetic waves that microwaves use are actually called “microwaves.” They are longer than infrared but shorter than radio waves.

If you were using a microwave before turntables were added, you might remember biting into food that was scalding hot in some places and still cold in others. Cooking instructions used to tell you to rotate an item every 45 seconds to a minute.

The uneven nature of microwave cooking led to the incorrect belief that microwaves cook from the inside out. In reality they heat the place with the most liquid the fastest. Microwaves (the actual waves) cause water molecules to twist, which creates friction. You likely remember from physics class that friction = heat. With that understand it makes sense that the spots in food with more liquid would get hotter.

But why does rotating it help? It turns out that microwaves don’t travel very far and are easily disrupted. Since the waves don’t converge on the food from all directions, rotating it allows the microwaves to have direct access to more of the surface of the food.

Because of this uneven heating, many cooks prefer to only use a microwave to reheat fully cooked foods.

The downside (cons) of microwaves

Unhealthy food – The first thing we have to acknowledge is the huge numbers of horribly unhealthy food the “food” industry has created for microwaves. Fat, sugar and salt in the perfect Bliss Point hitting combination to make you crave more, even if you’re full.

How many commercials have you seen promoting kids feeding themselves using a microwave? Now think about what that food is. Pizza, cheese sticks, previously fried tortilla rollup things, fake butter slathered popcorn, cheese, cheese and more cheese. I couldn’t find anything suggesting kids pop some oatmeal, broccoli or peas in the microwave.

Issues with containers – There is no such thing as “microwave safe plastic.” Yes, even though TV dinners (are they still called that?) often have instructions telling you to leave the plastic in place to heat them. Heating plastic allows BPA and phthalates to leach into the food. No one wants a side of neurotoxin with dinner.

Glass allows microwaves to passthrough unimpeded to heat your food. But it is also really good at conducting heat. The hot contents will heat the glass and the glass will burn your hands. Even “microwaveable” stoneware gets hot when the food transfers heat. No doubt you’ve learned this by burning your fingers more than once. (To be fair – this is an issue with any type of cooking, not just microwaves.)

Isn’t it funny that slang for using the microwave is “nuking it?” But nuclear fusion has nothing to do with a microwave. The FDA requires that microwaves be sealed to prevent the waves (radiation) from leaking. As long as the seal, door and latch aren’t damaged, your microwave should be safe to use. They (the FDA) say if your microwave will run with the door open, stop using it. (I feel like that should go without saying. But they said it so, I’m sharing it.)

Obviously, we don’t recommend eating meat in general. But we know that some of our followers are in transition or are only partly plant-based. With that in mind, two things to consider.

Public health risk – because microwaves heat unevenly, using them to cook meat (taking it from raw to consumable) has some risk. If ALL of the meat is not heated to at least 140 degrees Fahrenheit the pathogens found in raw meats may not be killed.

Cancer causing compounds – You may know that pan-frying, baking and barbecuing meat creates cancer-causing HCAs (heterocyclic aromatic amines). A study published in 2015 by the Journal of Food Processing and Preservation found that microwaving it isn’t any better.

A 2004 study compared cooking beans in a microwave versus a pressure cooker (no data on cooking them in a pot on the stove – which is what I do) found that the protein was 5% less digestible in the microwave cooked beans.

But a 2009 study found that microwaved vegetables retained their antioxidants as griddling (what is that?) and baking and more than boiling, frying or pressure-cooking. The differences were small. But the point is, microwaving wasn’t worse for nutrition value as many people argue.

As long as you’re using a microwave to make and heat healthy foods, they are perfectly fine to use. We make oatmeal in ours every day. We also use it to heat frozen veggies and cook sweet potatoes. Of course, the choice to microwave or not is a personal one. As long as you’re eating mostly plants you really can’t go wrong.

Have you watched our new webinar yet? The No BS Guide to Succeeding (Forever) on a Plant-Based Diet is available for a limited time here