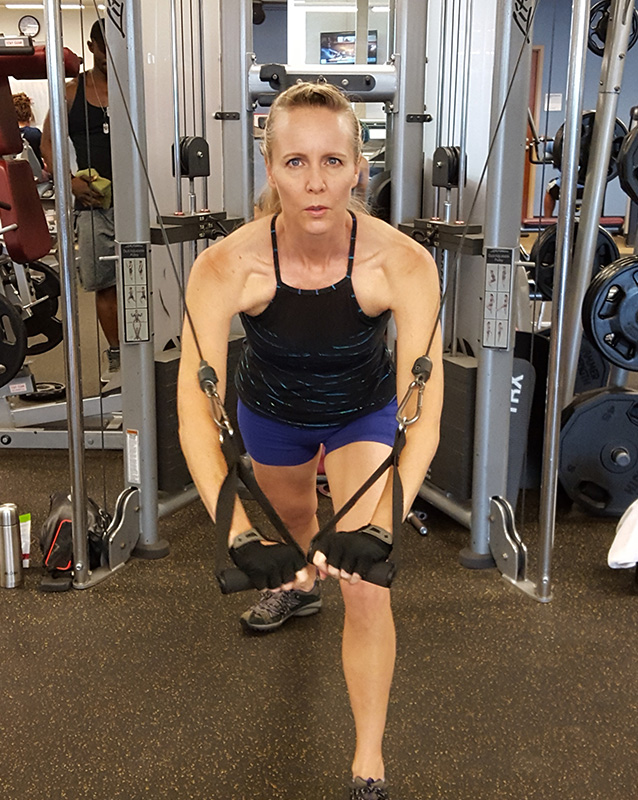 Growing up on a farm, I always had a lot of energy. As a teenager someone said to me, “I used to babysit you. I have never met a two-year old who was so exhausting.” (How do you even respond to that?) In high school I ran cross country and track but at 18 I was moved far from home (long story) and didn’t have the opportunity to exercise anymore. Looking back at pictures it’s easy to see that I got a little fluffy. Not to worry though. In my early 20’s I discovered volleyball, eventually playing competitively in beach tournaments. In those pictures I’m back to my lean, athletic self.

When life moved on from volleyball I continued to go to the gym and lift. But the intensity wasn’t there. I no longer had a workout partner or the competitive motivation. I would go regularly, take a break and go regularly again (sound familiar?)

In my mid 30’s I was soft again, but not in the girlish way I was at 20 but in a thick-around-the-middle-I-have-no-waist kinda way. When I complained about it people would tell me I was “crazy” and that I was skinny. But I didn’t feel it. I bought a high-bred bike (halfway between a road bike and a mountain bike) and started riding 10-20 miles at a time (weather permitting). But the weight just kept creeping on.

About the time I finished my doctorate in psychology and started my coaching and speaker training business in my late 30s another nagging problem arose. My cholesterol started to do more than just creep upwards and doctors started telling me I should take a statin.

By 45 I was twenty pounds overweight and my cholesterol hit 256.  I was working out 5 days a week religiously and biking 50-100 miles a week three seasons a year. But nothing was touching my weight (which kept rising) or my cholesterol. My doctor was addiment that I needed to start taking a statin.

I relented and picked up the prescription. One of the (supposedly rare) side effects of statins is muscle damage. Within 6 weeks of starting cholesterol lowering drugs my shins ached so badly I couldn’t sleep. I called my doctor and told her, “This is simply not going to work.” She said, “Did you change your workout? Maybe it’s not the prescription.” But I know my body better than that. This was not overuse or injury pain. Something was really wrong. Within six weeks of stopping the drug, my legs were fine (and have been since).

It was about that time that Russ and I decided to go on a diet. Don’t look it up. For an entire month we got serious. No sauces or butter. Bread was out! We had always eaten “healthy” (we are after all both former competitive athletes), so baked chicken breast, ground turkey breast or salmon with a veggie (usually broccoli or peas) was easy (It was basically the Mediterranean diet with portion control). And going to the gym 5 days a week and 20+ mile bike rides were the norm. But our weight didn’t budge.

A friend said to me, “Robyn, just do what the rest of us do and wear Spanks!” (Can I just say for the record, just trying those things on made me want to cry!)

No worries. We will just double down on the portion control diet! But towards the end of the second month, still nothing. In fact, Russ jokes we might have gained three pounds.

I went back to my doctor and explained what I had changed and to ask why nothing was working. She said to me, “Robyn, you’re over forty. Women over forty gain weight. Maybe you should see a psychologist about your body dysmorphic disorder.”

I AM a psychologist. I didn’t have body dysmorphic disorder. I was over my ideal weight by at least twenty pounds. I needed to figure out the answer myself.

If I could find school anywhere in the world offering a nutrition class, I took it. I listened to lectures, attended webinars, went to symposiums and conferences. I read scientific articles and books and then read all the scientific articles and books they referenced. I joined groups and chatrooms meant for doctors and nutritionists. I even got a certificate in nutrition from The Center for Nutrition Studies at Cornell.

Every rabbit trail I followed led to the same place – plant-based nutrition. But I grew up raising and eating our own beef, chicken and rabbits. We got our milk, raw from the dairy up the road. Plant-based? Really?

But yes. That is what the science says.

You know what? I am nothing if not willing to change my mind based on evidence. And so, our plant-based journey began. First with the plan to only be 80%.

The weight that wouldn’t budge started to melt away.

The cholesterol that I was told had “nothing” to do with what I ate, dropped like a rock.

My gut issues went away.

Soon I realized I felt better just not eating animal products or processed food at all.

Clients and people at the gym started asking what we were doing. How come my skin looked so good? How were we losing weight? Could we help them?

And from that, Whole Food Muscle was born.

Welcome to the most amazing journey of my life. It is my hope that our journey can help you in yours.